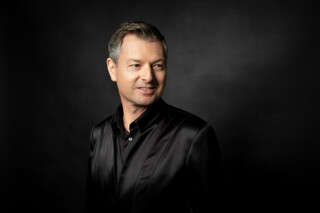 Christoph Walter is one of the most versatile musicians in Switzerland. His life is music and he lives it for an enthusiastic audience. Christoph studied trumpet, piano, drums and brass music direction at the Zurich University of Music. In addition to the musical direction of numerous formations, he is also known as a successful composer and arranger. Flyin ’To The Skies, Just In Time, Celtic Crest and countless other arrangements came from his pen. Many of them have been published by Obrasso-Verlag. Sheet music is available in a wide variety of scoring and can be ordered online from Obrasso Sheet Music.

From 1991 he was responsible for training numerous recruit games for seven years. Between 1998 and 2011 Christoph Walter worked as an instructor at the Military Music Competence Center. During this period he built up the Representation Orchestra of the Swiss Army Game - today's Swiss Army Central Band - together with Colonel Robert Grob and Major Patrick Robatel. From 2002 to the end of 2012 he was musical director of the Swiss Army Concert Band, which has already staged entertainment shows in Japan, in the Vatican and annual sold-out entertainment galas in the KKL Luzern with guests such as Sandra Studer, Pino Gasparini, Renée Rousseau and Fabienne Louves.

With his Christoph Walter Orchestra, founded in 2009, he can already look back on highlights such as “Art On Ice”, the presentation of the “Swiss Awards”, “Quartz” - the presentation of the Swiss film prizes and the gala of the Swiss Gymnastics Association “STV-Gala” . In 2010 he was appointed Music Art Director at Basel Tattoo. In this position he is among other things musical advisor to the producer as well as composer and arranger. He is also responsible for the opening and the finale and wrote the anthem for the Basel Tattoo Celtic Crest in this context.

Despite his preference for light music, jazz and classical music, his love for marching music has accompanied him since early childhood. The power of the simple 2/2 or 4/4 time characterizes the rhythm of the march music with a sharp accent and this simple, captivating style has fascinated people for decades. The great interest of the public in tattoos and marching music parades shows that this genre is receiving additional attention again today. In the past, the original quality and importance of marching music was little appreciated and the marching music repertoire was neglected for a long time. Christoph Walter is one of the first to try to do justice to the cultural value and demands of the march anew. More than 30 compositions testify to his passion for marching music.