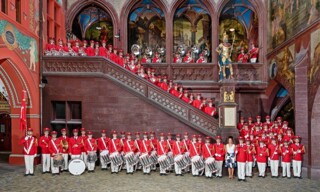 The Swiss Army Central Band with their tambours always convinces the audience with fascinating performances and skilful shows. As the figurehead of Swiss military music, the Swiss Army Central Band appears at music festivals and tattoos in Switzerland and abroad. She maintains an entertaining and attractive concert program and has already produced several recordings. The first CD recording was released in 2014 by Obrasso Verlag.

Major Aldo Werlen is responsible for the musical direction of the formation. Staff adjutant Philipp Rütsche has led the formation as a drum major since 2006 and plans the choreographies for the music shows. Roman Lombriser has been a guest conductor of the drum formation since 2017.

The orchestra presents itself in its red gala uniform and repeatedly inspires an audience of millions at major music festivals in Russia, Germany, Italy, Austria, Great Britain and Scandinavia. Participation in large tattoos, such as the Norsk Militaer Tattoo in Oslo, several times in Basel at the Basel Tattoo or, as in 2016, the Hamina Tattoo in Finland, are on the program of the Swiss Army Central Band almost every year. And so the appearance of the formation was certainly a highlight of the Bundeswehr Music Festival 2017 in Düsseldorf. In addition, the representative orchestra also casts its spell over the audience at hall concerts, such as at the gala of marching music in the KKL Luzern, with high-quality performances.